One of the newest acronyms circulating in I.T. circles is the term BYOD—Bring Your Own Device. And as much as it might sound like an invitation to a social occasion of some sort, BYOD is really a wakeup call to beware your own downfall, so to speak. Or your firewall's downfall, at least. That's because BYOD—the practice of bringing personal devices into corporate workplaces where they are used to connect with the business's wifi, its networks, and its internal processes—is a practice that is fraught with security risks.

Interviewed recently on this subject by PBOG Magazine, Lance Tolar of Tolar Systems explained the phenomenon and its implications in the business world.

“Here’s why BYOD is a major issue: mobile computing devices have significant computing power and often operate outside of network policy rules,” Tolar said. “These devices revolve in/out of networks every day. Devices can carry malicious apps, vulnerabilities, or malware. Mobile devices are insecure endpoints connected to the world. If an unprotected, unauthorized computer can do it, a mobile device can do it too, and you’ll never know it.”

The infiltration can go straight to the heart of the organization because it’s behind the firewall, Tolar said. 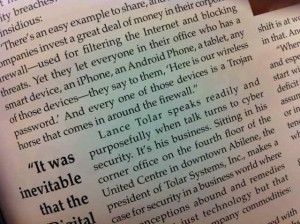 Let’s say I give my device to my junior high kid so he can play a game, and he downloads an extra for that game that has malware,” he continued. “Since my device likely does not have security software, I now have a compromised device that is right at the heart of the corporate network—it walks in the front door, executes its code, and walks right back out. It may have reported from inside your firewall. You never even knew it happened.”

Protecting against breaches caused by BYOD are actually more easily handled than most business people would likely expect, and so the risks that are confronting businesses every day are quite unnecessary and fairly easily confronted. But it generally requires the help of a trained technician or consultant.

For the full article, “Tolar on BYOD,” go to this link: http://pbog.zacpubs.com/tolar-on-byod/